THE COMPOSER – MODEST MUSSORGSKY (1839–1881) – If melancholy were a job, Mussorgsky would have enjoyed a very successful career. Haunted by the loss of his dear friend, Victor Hartmann (the inspiration for Pictures at an Exhibition), and left alone after his roommate Arseny Golenishchev-Kutozov moved out of their tiny shared flat to get married, Mussorgsky in 1874 was drinking a lot and wallowing in the misery of his own mortality. The departure of his friend Golenishchev-Kutozov was particularly tough on the composer, as the two companions (who were distant relatives) had shared a bond over the gloomy poetry Arseny wrote. In fact, the pair of song cycles Mussorgsky composed with Arseny’s words have titles that capture his mood at the time perfectly—Sunless and Songs and Dances of Death.

THE HISTORY – 1874 was not without some good news for Mussorgsky. Boris Godunov premiered with great public success that year, which for another artist might have signaled a professional pinnacle. But Mussorgsky was highly sensitive to the critical reactions to Boris, which ran counter to those of the audience and included some particularly harsh words from his colleague Cesar Cui. Mussorgsky was already lamenting the steady disintegration of The Five (the group of influential composers who defined a nationalistic Russian sound in the mid-19th century), calling them “traitors” in his letters, so the rebuke from a member of his squad hit very hard. Though incomplete at the time of his death in 1881, the opera Khovanshchina (The Khovansky Affair) may have provided a measure of intellectual solace for Mussorgsky. He began his slow work on it in 1872 and by 1874 had sketched out the present prelude in piano form. “The Introduction to Act I,” he wrote to a friend, “—dawn over the Moskva River, the matins of the cock-crow, the patrol, the taking down of the gate chains—and the first incursions into the action are already prepared.” Prepared, perhaps, but even Mussorgsky had to admit that the “incursions in the action” were not yet written down. He labored over the project for the rest of his short life, but its realization and orchestration were left to others, Rimsky-Korsakov most notably. The story of the drama centers on Peter the Great and his palace intrigues with the various groups bent on preventing his rise to ultimate power. Prince Ivan Khovansky was a leader of the old nobility who, along the implacable churchmen and the accommodating “Europeans,” is crushed under Peter’s boot. Though you wouldn’t know it from its peaceful introduction, the opera depicts a distinctly Russian (and distinctly current) struggle between old and new, and the brutal price such a conflict extracts from the combatants.

THE WORLD – Elsewhere in 1874, Denmark granted Iceland a constitution and limited home rule, Far from the Madding Crowd was published by English novelist Thomas Hardy, and cartoonist Thomas Nast first symbolized the American Republican Party with the image of an elephant.

THE CONNECTION – The Khovanschina Prelude has been performed rarely by Utah Symphony, most recently in 1992 under the baton of Joseph Silverstein.

THE COMPOSER – SERGE PROKOFIEV (1891–1953) – Prokofiev’s American years (the years when he lived here, rather than just toured here) were a disappointment. Though he performed often as a pianist and composed important pieces during the period, he never felt fully understood by American audiences or critics. Prokofiev had attempted to capture the same lightning that Rachmaninoff seemed to so effortlessly ignite in North America, and he had the goods to back up the ambition, but his results were never better than mixed. At least he met his future wife Lina in America, but the two left for Europe for good in 1922 with “nil” to show for his final season here.

THE HISTORY – The rather grim summation of “nil” fails to take two things into account, at least in hindsight. Both The Love for Three Oranges and the 3rd Piano Concerto had succeeded nicely in Chicago that previous December. Nice success was only the first global impression of the concerto, however, as European audiences would soon proclaim it the finest yet of Prokofiev’s concerti. Much of the thematic material for the concerto was taken from older sketches and unfinished projects, some of which dated as far back as 1913 (and maybe even earlier). Most intriguing of the repurposed music was the “white” string quartet (white meaning composed without accidentals or “black” piano keys) that Prokofiev challenged himself to write but was forced to abandon as overly difficult (not to mention a little arch as compositional ideas go). Two themes from the second movement of the quartet found their way into the finale of the new concerto. Prokofiev completed the piece in 1921 while vacationing in coastal France and, perhaps in an effort to give it one last shot in America, he returned there for the premiere in December of 1921. Both the 3rd Concerto and The Love for Three Oranges earned positive, if measured, receptions in Chicago but neither garnered any support whatsoever from the New York critics two months later. Prokofiev modestly recalled his works being “splendidly accepted by the audience” in New York but likened their critics to a “pack of dogs” hell bent on “tearing his trousers to shreds.” With responses like that, it’s little wonder that Prokofiev set to packing for Europe right away. He found what he was looking for on the other side of the Atlantic, in Paris specifically, where his incredibly enchanting and inventive concerto quickly gained its aforementioned confirmation as a truly great 20th-century exemplar of the form. France, though equally baffling to him at times, would prove a stylistic turning point for Prokofiev on his slow but steady march home to Russia, torn trousers and all.

THE WORLD – Elsewhere in 1921, the Irish War of Independence ended in a truce, the Tulsa Race Riot occurred, the infamous Sacco and Vanzetti trials concluded, and Communist political parties began forming throughout Europe.

THE CONNECTION – Prokofiev’s Piano Concerto No. 3 was last performed by the Utah Symphony on the Masterworks series in 2014 with Conrad Tao as soloist and Thierry Fischer on the podium.

THE COMPOSER – PIOTR ILYICH TCHAIKOVSKY (1840-1893) – Like most of the snapshot moments of Tchaikovsky’s life (and so many other of our most beloved composers it seems), the year 1888 could be accurately remembered for either its professional successes or its personal setbacks. He was awarded a lifetime pension that year by Alexander III and was enjoying recognition across the musical map, but he was also reeling from the loss of his friend Nikolai Kondratiev and what he considered his own “final illness.” Expecting the end to come at any moment during these up and down times, Tchaikovsky had drafted his will two years earlier. New triumphs were just around the corner, in America no less, but there was no telling him that.

THE HISTORY – Though 11 years separate the 4th and 5th Symphonies, Tchaikovsky was by no means idle during that stretch in his orchestral pursuits as a composer. He wrote a few thrilling suites (of which two could have been rightly called a symphony) and the unnumbered Manfred Symphony. As his official return to the form, the 5th Symphony was not as explicitly “programmatic” as the 4th, though many have tried to pin similar notes to its coat. The impulse was not wholly without reason or possible evidence. It still isn’t. Tchaikovsky’s own notes on early sketches of the new symphony speak of a “complete resignation before fate” and “the predestination of Providence.” He also wrote of “reproaches against XXX” and asked whether or not he should “throw [himself] into the embraces of faith?” These are tantalizing fragments of thought, real ones, and they almost match the mood of the symphony’s opening movement. The mention of “fate,” whether in the Beethovian sense or something much more personal, surely needs no introduction as a lifelong obsession of Tchaikovsky’s. But what in the world was “XXX?” Tchaikovsky’s diaries contain the frequent use of codes like “X” and “Z” when he wished to be coy about something, but the hidden subjects (homosexuality? gambling addiction? something else?) represented by these sterile designations have never left the realm of theory. In the end, he might well have had a narrative in mind for Symphony No. 5 but simply abandoned it. “A wonderful programme,” his notes on the sketch also stated, “if only it could be fulfilled.” Perhaps it couldn’t be. Regardless, the music does not believably match the suppositions. There is far too much conquering will (and too little resignation) in the score to see it as a journey past Tchaikovsky’s many personal demons, before which he was not done cowering in 1888.

THE WORLD – Elsewhere in 1888, Wilhelm II was crowned German Emperor, Jack the Ripper was terrorizing London, Louisa May Alcott died of a stroke, and Vincent Van Gogh famously removed a portion of his ear.

THE CONNECTION – Tchaikovsky’s 5th was last performed by the Utah Symphony on the Masterworks Series in 2016. Thierry Fischer conducted. 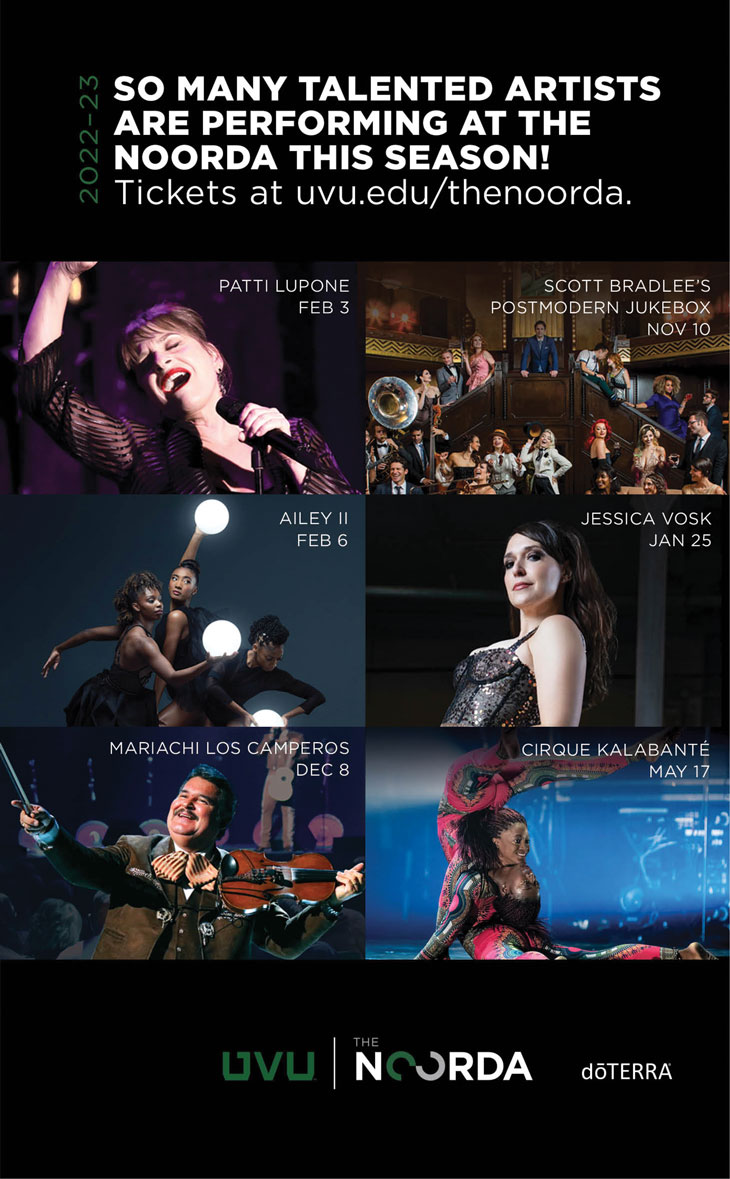