“The Moldau” from Má Vlast

THE COMPOSER—BEDŘICH SMETANA (1824–1884)—If Dvořák is to be credited with bringing Czech classical music to the world, Bedřich Smetana must be acknowledged as the man who truly established it at home. These two musicians, the King and Crown Prince of a growing orchestral and operatic ethos, were not the first to write music that centered Czech language and folk tradition, but Smetana was the first to project a distinctly national voice for his people. It wasn’t always so. Born into a German-speaking household, his early professional life reflected an obsession with a Hungarian giant (Liszt) and a job in Sweden, but Smetana returned “home” to Prague for good in 1862.

THE HISTORY—Smetana was forced to step down as Principal Conductor at the Prague Theatre in 1874, thanks to that most cruel (and famous) of composer ailments—deafness. It was only partial at first, his hearing loss, but it soon became complete, and permanent. Of course, this sad fate brings Beethoven to mind. Much like that older master, Smetana continued to write music he would never be able to hear. Má Vlast (My Country) was a cycle of tone paintings composed over a period of five years from 1874 to 1879. This pictorial and historical tribute to Bohemian pride fully fixed Smetana’s legacy among his countrymen and provided the rest of us with one of the most popular orchestral works to come out of any culture. Vltava (The Moldau in German) was the second movement of the suite but is performed today most often as a free-standing concert work. The Vltava River is the longest in Czechia. It runs on a short southwesterly course out of the Bohemian Forest before turning definitively north and eventually emptying into the Labe River (Elbe in German) several miles north of Prague. Strauss’ Blue Danube had been written during the previous decade so music about important waterways was certainly in the air when Smetana chose his subject in 1874. Unlike Strauss’ loosely poetic homage, Smetana designed his river piece as a realistic sonic boat ride. His notes to the publisher included a sketch of his proposed journey through Bohemian landscape and life. From the “two springs” that gave birth to the Vltava in the forest, a “mighty stream” passes through a hunter’s wood, flows past a wedding feast, reflects “many a fortress and castle” and braves the “Rapids of St. John” before widening “in majestic calm” as it approaches Prague, the Vyšehrad fort and the quiet beyond. The gorgeously catchy main theme of Vltava has a slightly murky provenance, but it was quickly adopted and anthem-ized by Czech people and others throughout Europe.

THE WORLD—Elsewhere in 1874, Denmark granted Iceland a constitution and limited home rule, Far From the Madding Crowd was published by English novelist Thomas Hardy, and cartoonist Thomas Nast first symbolized the American Republican Party with the image of an elephant.

THE CONNECTION—The Moldau was last performed by Utah Symphony in 2006 under the direction of Pavel Kogan.

THE COMPOSER—OLIVIER MESSIAEN (1908-1992)—Though he is still perhaps one of the most unclassifiable composers of the 20th century, Olivier Messiaen’s two consistently abiding influences—his deep Catholic faith and love of birdsong—provide a semi-stable foothold for explorations of his life’s work. “I speak about faith to those who have none,” he told an interviewer shortly before his death, “I give bird songs to those who have never heard them…” Messiaen believed birds to be creation’s greatest musicians and found in their complex vocalizations a depthless font of spiritual expression. Their world, the awe-inspiring natural world, contained all the great mysteries of God and virtually every piece he wrote was a humble attempt to understand them.

THE HISTORY—The commission from the formidable American arts patron Alice Tully in 1971 to commemorate the upcoming bicentenary of the Declaration of Independence wasn’t initially very appealing to Messiaen. On paper, it certainly does not seem like the kind of subject he would have been drawn to, but Tully convinced him to say yes. His approach to the project was, of course, oblique and idiosyncratic in that he did not seek encouragement from the famous document itself or any other important founding letters. Messiaen instead consulted an encyclopedia and found, in photos of the glorious red rock formations of Utah, a collection of prehistoric cathedrals that suited his personal convictions, and the scale of American uniqueness, perfectly. He arranged a trip to see the landscape for himself in the spring of 1972 and his journals from that time depict a devoutly observant man in awe of everything he saw and heard. The result was Des Canyons aux étoiles... (1974). Part western travelogue, part birding trip, part metaphysical transition from terrestrial dust to cosmic light, Canyons is a 100-minute suite of rapturous experiences, ranging in seemingly random order from a single bird to an unspeakably magnificent celestial city. “…it is above all a religious work,” he wrote, unsurprisingly, “a work of praise and contemplation,” while also adding that “The majority of the birds are from Utah and the Hawaiian Islands. Heaven is symbolized by Zion Park and the star Aldebaran.” Movement X—La Grive des bois—portrays the American Wood Thrush while Movement XI—Omao, Leiothrix, Elepaio, Shama—features a collection of Hawaiian, Chinese, and Indian birds. These movements highlight Messiaen’s gift for transcription. The distance between his meticulous field notes and the score is often marked by a certain license, but his fidelity to the soul of each animal is profoundly moving.

THE WORLD—Elsewhere in 1974, (like Nixon) Israeli leader Golda Meir resigned, as did Willy Brandt in West Germany; the Terracotta Army was discovered in China; and the “Rumble in the Jungle” occurred in Zaire between Muhammad Ali and George Foreman.

THE CONNECTION—Des Canyons aux étoiles...was last performed by Utah Symphony in 2007 under the direction of Keith Lockhart.

THE COMPOSER – JEAN SIBELIUS (1865-1957) – Sibelius met Axel Carpelan in 1900 and their friendship would soon have a significant impact on the composer’s career. Carpelan was a bit of an odd character and though described variously as an “amateur” or “failed” musician, his devoted (and, for a time, anonymous) adoration of Sibelius’ music led to some far-reaching suggestions. Finlandia was his idea and he also felt Sibelius was ripe for a violin concerto and another symphony. Finland, at the turn of the century, was eager to move away from Russian cultural and political dominance and Sibelius was an enthusiastic contributor to these patriotic efforts.

THE HISTORY – It is interesting, then, that his Second Symphony would be inspired in part by non-Finnish experiences. One notable component of Carpelan’s brotherly advice was that Sibelius should visit Italy as soon as possible, citing the salutary effects that bright, pastoral country had on Tchaikovsky, Strauss, and others. For all his ambition on Sibelius’ behalf, Carpelan was not wealthy, but he was possessed of a formidably persuasive will and soon had the trip funded by others. The efforts were not in vain, though that would not be clear right away. The Italian diversion was defined by personal strains and compositional blocks for Sibelius, but he did make progress on an “orchestral fantasy” built in part with material from a pair of unrealized projects based on the Don Juan legend and Dante’s Divine Comedy. The “fantasy” soon became a symphony and, as such, was a work wholly different from its predecessor. The First Symphony had been a rather moody utterance, dimly reflective of the Finnish plight as Russian yoke-bearers, but the Second seemed a beacon of triumphal hope and possibly even a blueprint for future independence. This assumed political undertone was taken up immediately and in earnest by everyone but Sibelius himself, who denied any revolutionary program behind the music. His protestations, whether true or merely reactive, were unconvincing and ultimately unimportant. As an icon of his people’s growing nationalism, his creations were always icons themselves, in service to the larger aspirations of Finnish pride. Sibelius may have been anxious to promote the purely musical revolution he was offering and, when viewed outside the social lens, the Second Symphony succeeds there too. Sibelius knew he was breaking innovative ground, and while sketching out the themes and structures of the piece in Florence, he claimed to have “fallen fatally in love” with it. Even now, some 120 years later, the same could still be said for all of us.

THE WORLD – Edward VII was crowned King in the United Kingdom in 1902. Also that year, Leopold II of Belgium survived an assassination attempt and Sir Arthur Conan Doyle published The Hound of the Baskervilles.

THE CONNECTION – Sibelius 2 was last performed by the Utah Symphony in 2018. Kazuki Yamada was on the podium. 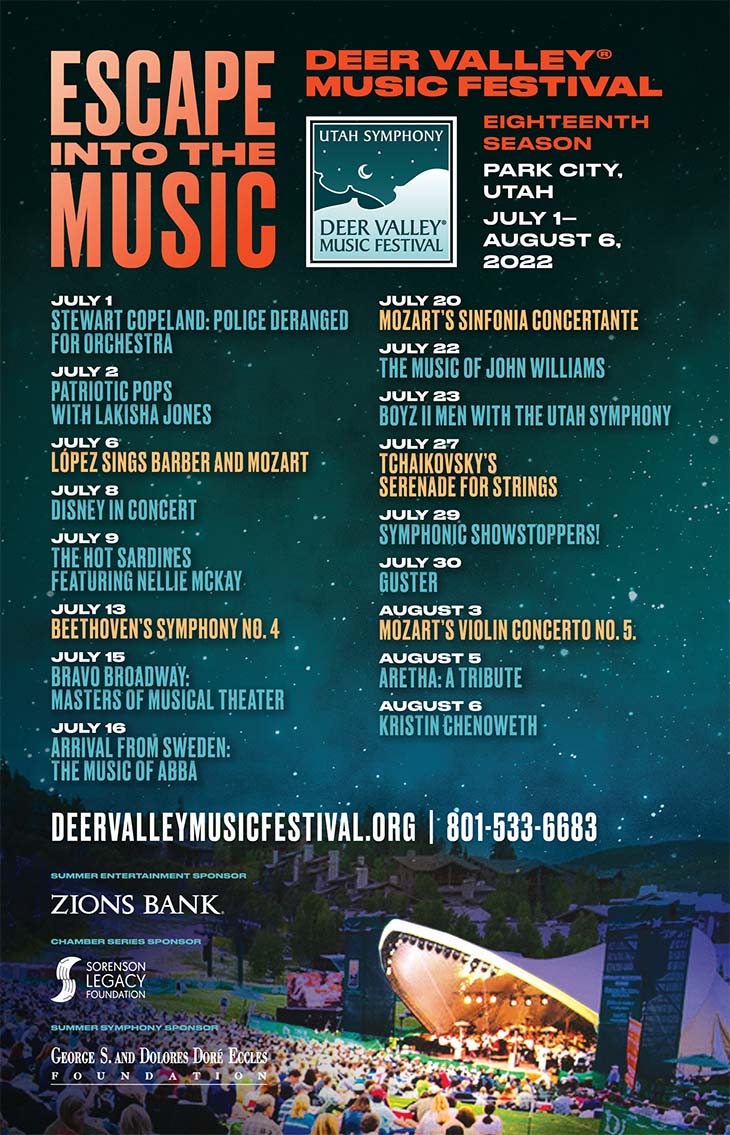